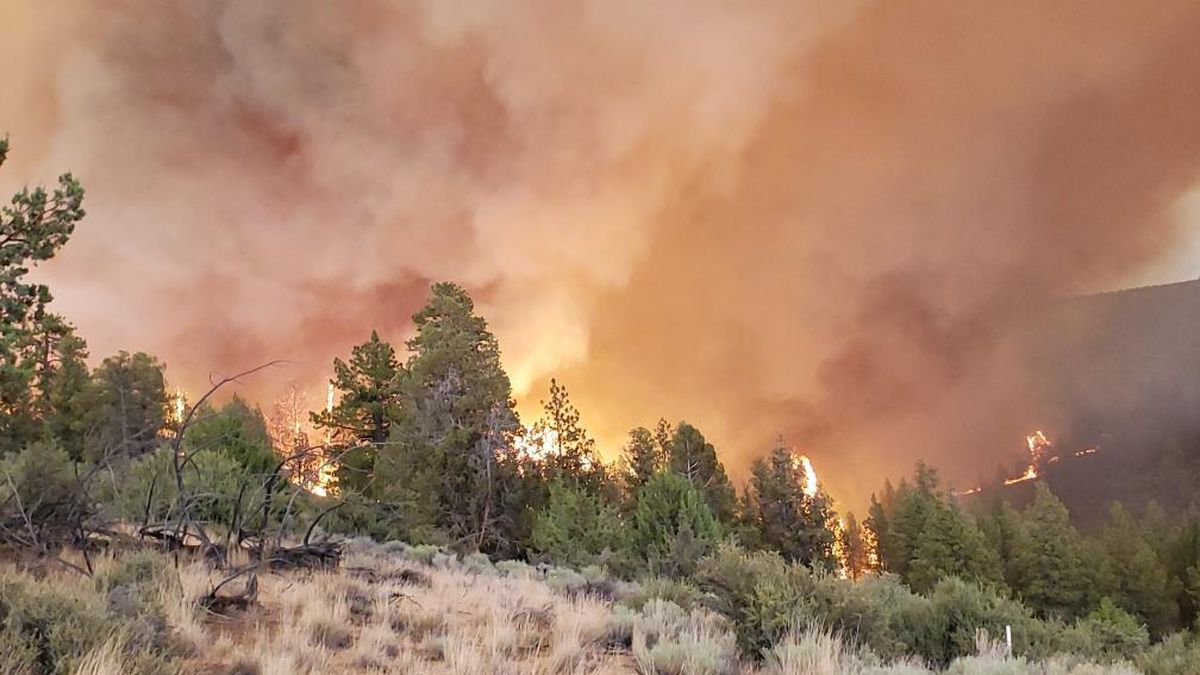 It’s only mid-July, but Oregon fire season is already in full swing. The Bootleg fire in Klamath County is the largest in the country, with more than 200,000 acres as of Tuesday morning. But that’s not the only blaze of concern: Smaller fires have also started and spread across the state in recent days, causing evacuations and threatening homes. Officials say fuels like trees and grass are unusually dry, which is more like what Oregon typically sees in August and September, not mid-July. And they’re adapting their tactics for this hotter, drier, earlier fire season.

â€œAdjust your reality,â€ Al Lawson, incident commander on one of two teams sharing the battle against the Bootleg Fire, told his crews Tuesday.

â€œWe haven’t seen a fire moving like this, under these conditions, this early in the year,â€ Lawson said, according to a firefighting incident report. â€œExpect the fire to do things you have never seen before. “

And he has a history of explosive growth, having doubled in size on Saturday and again on Sunday. Tuesday posed other challenges.

â€œThe wind picked up late last night, and they had an extra wave of warm weather,â€ said Rich Saalsaa, the incident contact for the Bootleg Fire. The fire team made good progress on the containment lines on Monday, but the hot evening wind blew them up on some containment lines.

By noon as of Tuesday, more than 1,100 firefighters and associated personnel had been deployed in the Bootleg fire, which threatened nearly 2,000 structures as well as a high-voltage transmission line that supplies California with electricity. “Firefighters and representatives of power companies are working together on plans to re-energize lines safely as soon as possible,” officials reported via Inciweb.

Areas of Klamath County north of Beatty, near Sprague and in the highlands remain under Level 3 â€œGo Nowâ€ evacuation orders, and evacuations have also been ordered for parts of Lake County.

Firefighters had to assist with evacuation attempts on the northeast side of the blaze when people fleeing the flames were trapped by the blaze and downed trees. Fire crews cleared the trees so the group could escape, according to the most recent incident report.

More information about the evacuation can be found here.

Fire to Burn: The Bruler fire began on Monday about 8 miles south of Detroit, near the scars of fires that burned communities in Santiam Canyon in 2020.

The North West Interagency Coordination Center estimated it had reached about 60 acres by noon Tuesday. He did not threaten any community or structure, but firefighters were asking members of the public to avoid logging roads in the area.

“This fire has the potential to spread and the forest is very dry,” Sweet Home District Ranger and Agency Administrator Nikki Swanson said in a statement. â€œThe safety of the public and the firefighters is our first priority. We are in the process of closing several roads and trails to ensure firefighters can work efficiently and the public remains safe. This will be handled as a complete suppression fire. “

Grandview Fire: The Grandview Fire, which burned north of Sisters and west of Black Butte in central Oregon, had reached just over 5,700 acres by late Tuesday morning. Since it began Sunday, it has caused evacuations in outlying communities in Deschutes and Jefferson counties and endangered dozens of structures. It burns through stands of juniper, brush and grass, and threatens 421 homes, according to an update posted on the Inciweb fire information website on Tuesday.

â€œWe had hot weather. And after the hot dome, our fuels are at an all time high right now, â€said Al Devos, the incident contact for the Grandview fire.

Crews established preliminary containment lines using bulldozers and fire retardants around much of the blaze on Monday morning, but active winds sparked point fires and the fire spread towards the west and south in Stevens Canyon. Crews fear that as the tide turns, the blaze could spread further south and into increasingly populated areas. According to Devos, there are also fears that the fire could reach areas with denser fuels. A team of structural fire trucks work to protect homes in the evacuation area by removing debris, bushes and trees closest to the homes.

Jack Creek Fire: The Jack Creek fire east of Roseburg had reached nearly 14,000 acres by Tuesday morning and was 15% contained. Firefighting crews were working to maintain and secure the containment lines as they burned north and south of National Highway 138. The community of Dry Creek as well as all residences on Illahee Road were under order. Evacuation Level 3 â€œGo Nowâ€, and people at other homes and businesses in the area are also urged to prepare for possible evacuations. Evacuation details are updated here.