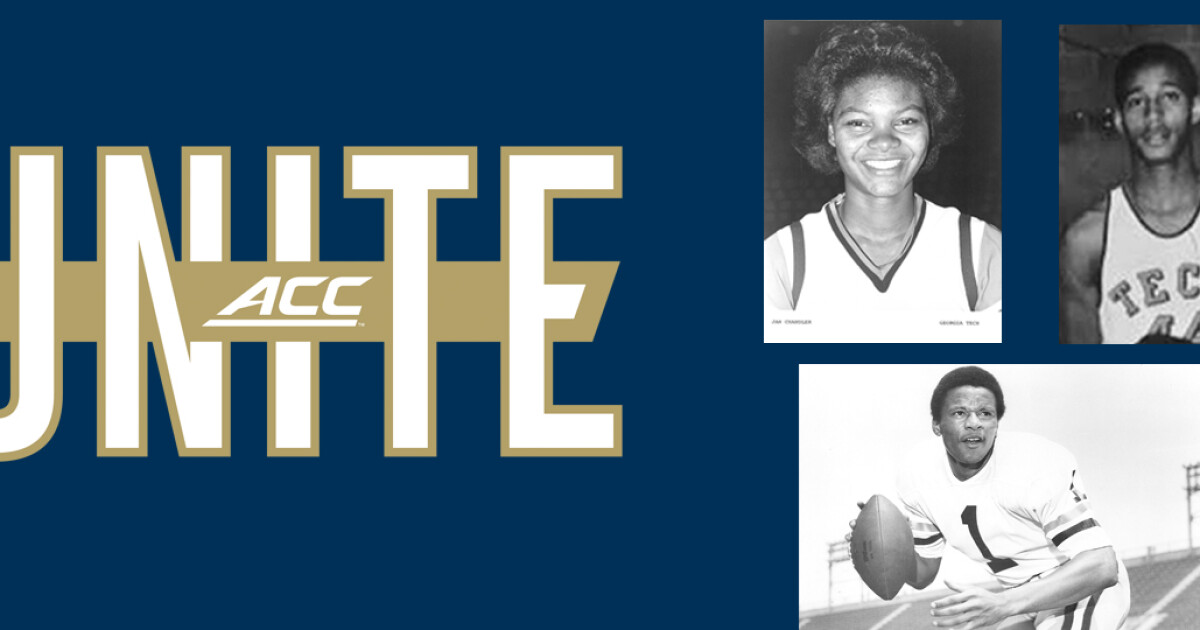 The ACC UNITE award was created to honor those affiliated with the league who have made an impact in the fields of racial and social justice. An initiative of the CCA Racial and Social Justice Committee (CORE – Champions of Racial Equity), the award was developed and endorsed by the 15 CCA member institutions.

This first year of the award, the league celebrates the people who – according to the information available – are the first male and female athletes of color to join the sports teams of each CCA institution. Georgia Tech will recognize Harvey Webb, 1967 (basketball – first-year team), Eddie McAshan, 1970 (college football team) and Jan Hilliard, 1975 (women’s basketball) as its recipients.

McAshan was the first African-American to receive a track and field scholarship and to play in a college game at Georgia Tech, as well as the second African-American to start quarterback in a major college football program in the Southeast. (after Wake Forest’s Freddie Summers). McAshan has amassed 4,080 yards and 32 touchdowns in 36 career starts for the Yellow Jackets. He broke 17 school records and still ranks among Georgia Tech’s all-time leaders in passing yards (eighth), touchdown passes (sixth) and completed passes (360 – sixth). His five touchdown passes against Rice in 1972 remain tied for most in a single game in tech history. He was 22-13-1 as a starter and helped the Jackets play three bowl games in three seasons. He also became Georgia Tech’s first African-American ever to be selected for the NFL Draft when the New England Patriots selected him in the 17th round in 1973. He graduated from Georgia Tech in 1979 with a degree in industrial management.

Hilliard (formerly Chandler) played women’s basketball under the direction of head coach Jim Culpepper. She came to Georgia Tech in 1975, just in time to be part of the founding of the women’s basketball program. The 1976-77 season saw the team make a breakthrough, finishing 19-8 and registering the program’s first two playoff wins in the GAIAW State Tournament.

The UNITE Prize will be awarded each year to people who:

In the future, each school will select a man and a woman for the annual ACC UNITE award.

CORE was established in June 2020 to support CCA’s commitment to social justice and racial equity. CORE membership includes conference office staff and campus representatives from each of the league’s 15 institutions. CORE’s mission is to promote and encourage inclusion, racial equity and social justice through education, partnerships, engagement and advocacy.

The Alexander-Tharpe Fund is the fundraising arm of Georgia Tech Athletics, providing scholarships, operations and facility support for Georgia Tech’s more than 400 student-athletes. Participate in the development of Georgia Tech’s Daily Champions and help the Yellow Jackets compete for championships at the highest levels of varsity athletics by supporting the Support the Swarm Fund, which helps Georgia Tech Athletics overcome the significant financial challenges associated with Covid-19, and the Annual Sports Scholarship Fund, which provides scholarships directly to Georgia Tech student-athletes. To find out more about support for yellow vests, visit atfund.org.