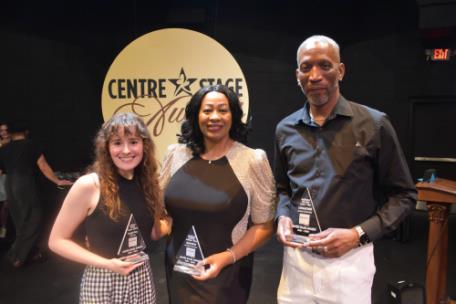 The volunteers who contributed to nine exciting shows that took to the stage as the Chattanooga Theater Center rebounded from the pandemic with the 2021-2022 season, took home top honors at the Center Stage Awards on Saturday.

The annual awards recognize the invaluable volunteers on and off stage who dedicated their time and talent to the success of the theater’s final season. The adults were joined by Youth Theater volunteers, many of whom received Sonia Young Honors for Excellence.

The major awards went to the Champion family as recipients of the President’s Award, which recognized the contributions of a beloved member of the CTC family, Vena Champion, who passed away this summer, and her sons, Drew and Alex. Box Office Assistant and Volunteer Kitty Murakami received the Producer Award, and CTC Book Club Founder Claire Bartlett was named Dan Jay Volunteer of the Year.

In behind-the-scenes roles, Juleen Collins was honored as Outstanding Stage Manager for her work on Joe Turner’s Come and Gone, and Karen Henderson was recognized as Outstanding Crew Member for volunteering behind the scenes at several shows.

For other services to the theatre, Pat and Bob Radel received the Outstanding Volunteer Front of House Award, and Laura Lewis received the Milly Farris Award for Outstanding Contribution to Youth Theatre. Carina Miller and Lily Obal were honored as Young Theater Managers of the Year, and Will James was recognized as Youth Theater Team Member of the Year.

Here is the list of other winners for each production: