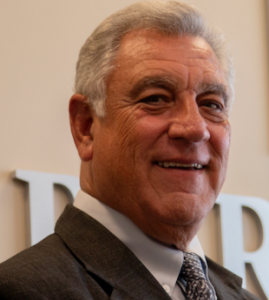 The stage is set for the final event in the Covington Business Council’s 50th anniversary celebration — CBC’s long-awaited annual dinner, Thursday, December 1 at 5 p.m. at the new North by Hotel Covington!

The Council will be one of the first groups to use the 500-seat site, the site of the former YMCA building at Pike Street and Madison Avenue.

This year’s event will be even more memorable as the CBC honors civic icon Jack Moreland with its Founder Award. The Founder’s Award honors an individual who demonstrates meritorious service in improving the economic well-being of Covington. It is given in honor of the founders of the Covington Business Council.

Moreland retired in 2021 as chairman of Southbank Partners and Newport Southbank Bridge Company. Jack’s work has bolstered Southbank’s advocacy efforts with the state legislature to secure funding for important projects such as Riverfront Commons. This eleven-mile uninterrupted cycle and pedestrian path was started in Covington and stretches from Ludlow in the east to Fort Thomas in the west. Southbank provides a unified voice and advocacy strategy for the South Bank.

Prior to taking charge of Southbank, Moreland spent 38 years in education, serving as Superintendent of Dayton Independent Schools for 19 years, Superintendent of Covington Independent Public Schools for eight years, and Acting President of Northern Kentucky University. for one year. He also spent a year as acting chancellor of the Kentucky Community and Technical College System.

In 2018, Moreland was honored by the NKyTribune as a NEWSMAKER and received numerous other accolades for his community service.

The annual dinner will also feature a video of the various activities celebrating CBC’s Golden Anniversary:

• A kick-off breakfast in March, celebrating milestone anniversaries of other community businesses/agencies and hearing an inspiring message from Covington through the eyes and voice of Mayor Joe Meyer,

• A luncheon in April where former general managers shared their persevering efforts not only to keep Radio-Canada afloat but also to ensure its future viability,

• A summer cocktail at Lisse Steakhuis accompanied by live music on the outdoor terrace,