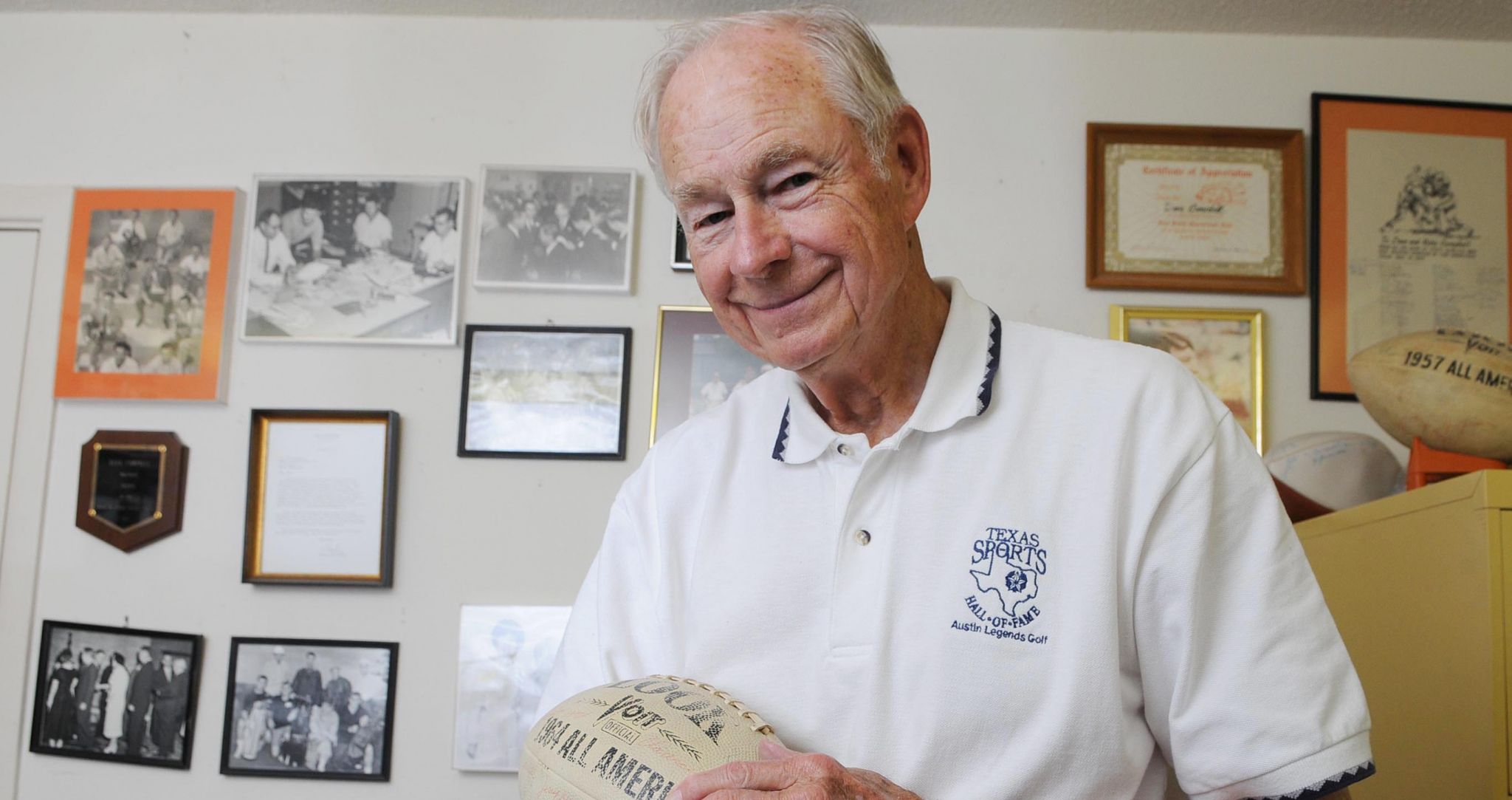 Dave Campbell, the venerable editor of the Central Texas newspaper whose name has become synonymous with the sport he chronicled and celebrated as the founding publisher and editor of Dave Campbell’s Texas Football magazine, died Friday evening at his home in Waco.

Campbell, a 40-year Waco Tribune-Herald sports editor and World War II veteran who received a Bronze Star for his service in the Allied assault on Germany, was 96 years old. He suffered a stroke this week and was briefly hospitalized before returning to his hospice home.

Along with his family, friends and admirers, he is survived by the publication he founded in 1960, which started out as a 96 page magazine and now focuses on print and digital publishing, sports broadcasts. regional cable, advertising sponsorships and video streaming.

For many, however, Campbell will be remembered not for the company he created, but for the kindness and encouragement he has shown to generations of writers, broadcasters, coaches and players. during the 70 years he wrote about Texas sports.

“He represented the world to me and to a lot of people,” said David McHam, former professor of journalism at Baylor University, SMU and the University of Houston and friend of Campbell since their days in the 1950s. as colleagues of the Waco newspaper. .

â€œDave was the kind of man who made you want to be a better person. He stood with so much dignity and grace.

As the Tribune-Herald’s sports editor from 1953 to 1993, editor-in-chief of the Baylor Insider for 15 years, and founding editor of Texas Football, Campbell was the rarest figure of any profession.

At 28, he succeeded a legendary writer in HH “Jinx” Tucker, who, as the Tribune-Herald’s sports editor, was involved in the genesis of Texas A&M’s “12th Man” tradition in 1921, and he surpassed the fame and influence of his predecessor through his magazine.

Through his magazine and his years at the Tribune-Herald, he helped launch the careers of generations of Texan journalists, including Chronicle reporter John McClain and former Chronicle editor Tony Pederson. All of them started as employees but have become friends and admirers.

â€œI grew up reading Dave Campbell,â€ McClain said. â€œHe gave me my chance in this business, and I owe him so much. He was truly a journalism icon and one of the best men I have ever met.

Campbell sold the magazine in 1985 to Host Communications but remained its editor. The magazine, video streaming service TexanLive and texasfootball.com are now owned by former Astros owner Drayton McLane, who bought the company from sports marketing giant IMG in 2014.

As a writer, Campbell has mixed in-depth descriptions of games, coaches and players with a touch of a historian. He mixed Shakespeare (“Time is irrelevant”) with Dean Acheson (“present at creation”) and Julia Ward Howe (“terrible and swift sword”), and he once went so far as to compare a Texas A&M -TCU matching coaches Paul “Bear” Bryant and Abe Martin in Wellington and Napoleon in Waterloo, with Bryant as a Wellington-style tactician matching the mind with Martin, which trained by sensation and intuition.

He was the first recipient of the Wilbur Evans Award for Lifetime Achievement in Sports Journalism, presented by the Headliners Club of Austin, and he received the Bert McGrane Award from the Football Writers Association of America and the Jake Wade Award from the College Sports Information Directors . Association.

Born in 1925, Campbell graduated from La Vega High School in Bellmead and briefly dated Baylor before enlisting in the military during WWII in 1942, but returned and graduated in 1950.

He served with the 14th Army Division in France and Germany, receiving the Bronze Star for his service in the Allied assault on the Wissembourg Gap that advanced US forces into Germany.

Campbell attended his first football game at age 5, a Waco vs. Temple game at Cotton Palace Stadium in Waco, and recalled listening to the TCU-SMU game on the radio in 1935, his first glimpse of the Southwestern Conference football spectacle that would help define his career.

He attended his first varsity game at the age of 12 in 1937, working as a usher for the Baylor-Arkansas game, and he became a household face in the press stands between the ages of 20 and 90.

Campbell once estimated that he had seen more than 500 Baylor games during his long career. Although he loved his alma mater and followed his sporting fortunes through good and bad times, only once did he take a significant step outside the realm of the impartial observer.

In 1986, Grant Teaff, who led Baylor to his first Southwestern Conference football titles in more than half a century in 1974 and 1980, was courted by USC to become its head coach when he asked to meet with Campbell to discuss the offer.

“I wanted to stay (at Baylor), but I didn’t want to turn down this kind of opportunity if I had outlived my usefulness at Baylor University, and I felt there was no one to talk to who would give me better insight than Dave, â€Teaff said in 1992.

“He was instrumental in my time at Baylor during this time, and probably at other times as well.”

Campbell’s death came days after Baylor’s Big 12 Championship win over Oklahoma State to clinch a spot in the Sugar Bowl, and less than a year after the men’s basketball championship of the NCAA Bears, and the juxtaposition of these events reflects the evolution of the profession and the subject to which he has devoted his professional life.

He came of age at a time when college football dominated the Texas athletic scene and continued to focus on college play even as professional sports took center stage. With the evolution of sports and journalism, Texas is unlikely to see people like him again.

His words, thankfully, remain, in his description of hundreds of eruptions, spikes, unforgettable and time-honored games and the two contests he said were the best he ever covered – the “Big Shootout” of 1969. between Texas and Arkansas and the 2006 Rose Bowl between Texas and USC.

In his 2019 book â€œDave Campbell’s Favorite Texas College Football Stories,â€ Campbell wrote, â€œI haven’t had too many bad days at the stadium. The spectacle, the human interest, the emotion, the suspense, the grueling physical contact, individual and team heroism – it all comes together in a way that captures my imagination like nothing else.

Regarding his long career, he said in a recent interview: â€œI have been so blessed. I would like someone to be remembered who did their best. I tried to be fair.

Campbell was predeceased by his wife, Reba Campbell, whom he married in 1949 after meeting as colleagues at the Tribune-Herald. He is survived by his sister Jo Campbell; two daughters, Becky Roche of Austin and Julie Carlson of Waco; and three grandchildren.