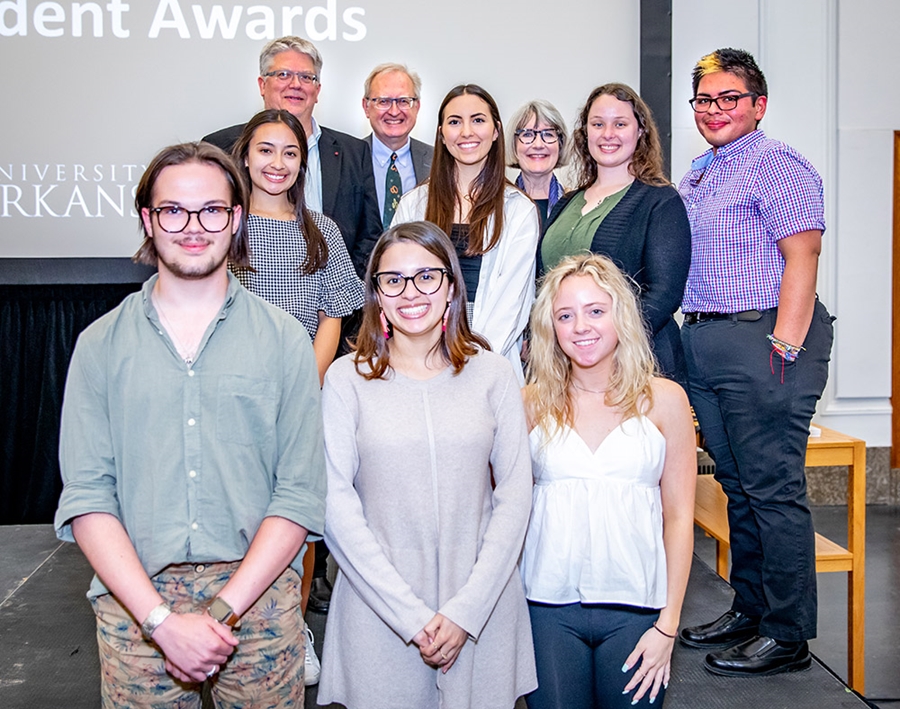 Dean Peter MacKeith, along with Ken and Liz Allen, stand alongside some of the 15 student recipients of the Ken and Liz Allen Award in Design, a new award this year as part of the Honors and Awards Recognition Program of Fay Jones School of Architecture and Design.

The Fay Jones School of Architecture and Design recently announced that nearly 90 students will receive scholarships and other awards through its 2022 Honors and Awards Recognition Program. This year, more than $270,000 – a 50% increase in monetary awards compared to 2021 – were awarded in the form of scholarships recognizing various aspects of student achievement in architecture, landscape architecture and interior design. The school held an honors reception and recognition ceremony on April 22 at Vol Walker Hall to celebrate these honorees.

“The Fay Jones School is committed to making its design degree programs both affordable and accessible,” said Peter MacKeith, Dean of the School, “and the ever-growing scholarship funds put available to our students are a testament to this ongoing effort. Our students are talented, hardworking and dedicated, and the generosity of our many donors and benefactors allows us to recognize this excellence in greater numbers. Congratulations to all of our scholarship and award-winning students, and a special thank you to our many donors and friends.

Many honors were bestowed in each of the three departments, while some honors were available to any student in the school. Some students have received multiple awards.

Students selected from across the school for recognition included: