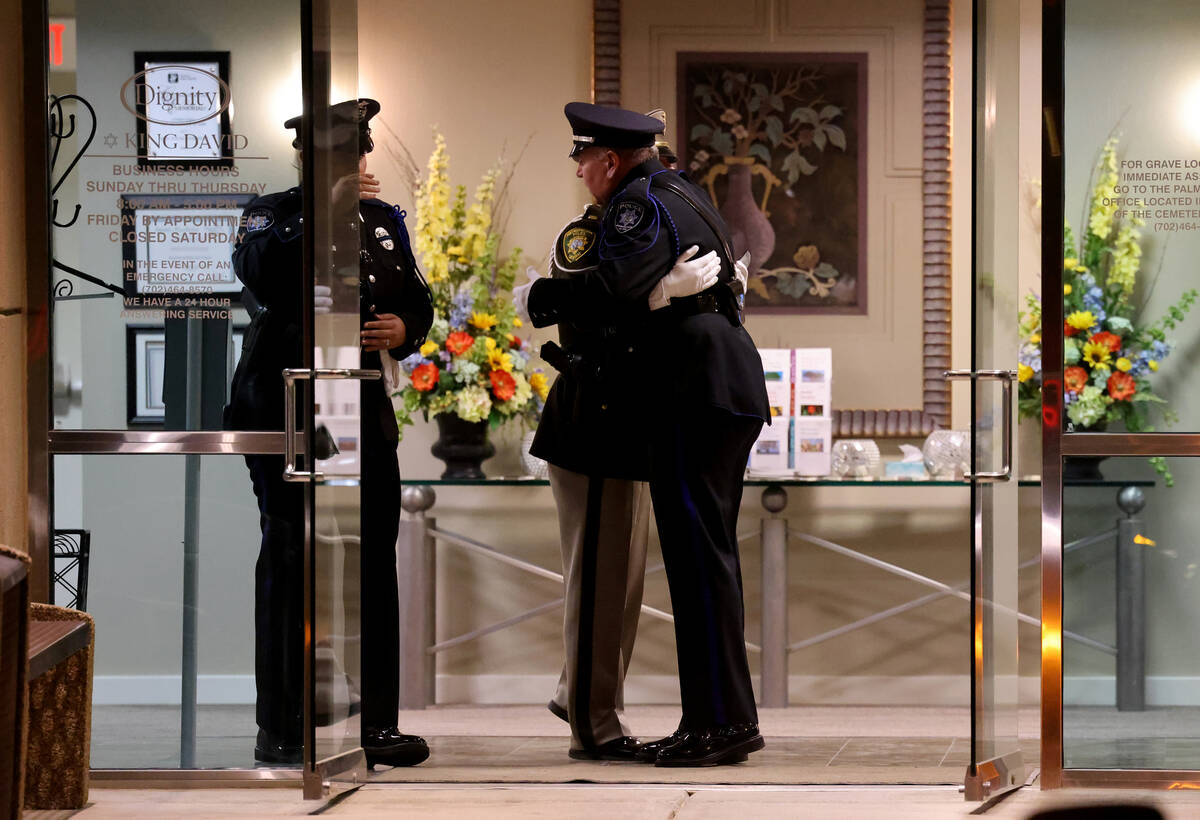 Two weeks after he was shot and killed in the line of duty, law enforcement from across the country and the local community gathered Thursday night for a public visitation honoring Las Vegas police officer Truong Thai.

From about 8 p.m. to 8 p.m., mourners entered and exited the King David Memorial Chapel, 2697 E. Eldorado Lane. Within the first hour, about 100 people had passed and mingled in the lobby.

A box of tissues was placed at each end of each pew.

Thai’s body lay in front of the chapel in an open casket partially draped in an American flag. Uniformed officers flanked his coffin and were replaced every 10 to 15 minutes by new officers.

The coffin was surrounded by candles, several flower arrangements and large printed photos of Thai people placed on easels. While the music played, two screens mounted on the wall at the front of the chapel played a slideshow of Thai’s photographs.

People came up one by one or in small groups to take a moment or a few minutes in front of Thai’s coffin.

Shot in the line of duty

Thai fired back with his sidearm as he lay on the ground after being hit. He was taken to Sunrise Hospital and Medical Center, where he died from a gunshot wound to his chest.

Thai was born in Bac Lieu, Vietnam in 1973. He is survived by his 19-year-old daughter, Jada, his father Quang, his brother Thuong and his sisters Amy, Mandy, Daisy and Betsy. Thai had worked for the Metropolitan Police Department since 1999.

Her family was seated near the front of the chapel, and local law enforcement was present with officers from departments that included Chicago; Aurora, Colorado; and Framingham, Massachusetts.

Diane Yost, of Henderson, who worked for the California Department of Corrections and Rehabilitation for 20 years, attended the viewing along with fellow Henderson resident Angela Napier.

“He’s a brother when it comes to law enforcement,” Yost said. “I’m a retired law enforcement officer, so I felt drawn to come and pay my respects to them because I appreciate the work they do. Each of them.”

Yost became emotional as he described the departments across the country represented during the viewing.

“It really touches my heart, it blesses me to know that it’s like one big happy family when it comes to law enforcement,” Yost said.

Napier encouraged people to thank the officers and tell them they are appreciated when they meet them.

“It just touched my heart to see that an officer, but such a young man, was shot unnecessarily, and I just wanted to show my respect,” Napier said.

At the back of the chapel was a table covered with items including a signed volleyball and a sign reading “Dad(n): My Hero.”

Thai’s funeral will take place at 10 a.m. on Friday at Central Church, 1001 New Beginnings Drive, Henderson. Prior to the service, a procession will begin at approximately 8:30 a.m. from the Palm Mortuary, 1325 N. Main St., and will pass through parts of the station hallway before ending at Central.

Traffic delays are to be expected around the route of the procession until around 9:30 a.m.

Donations to the Police Injured Fund can be made online.