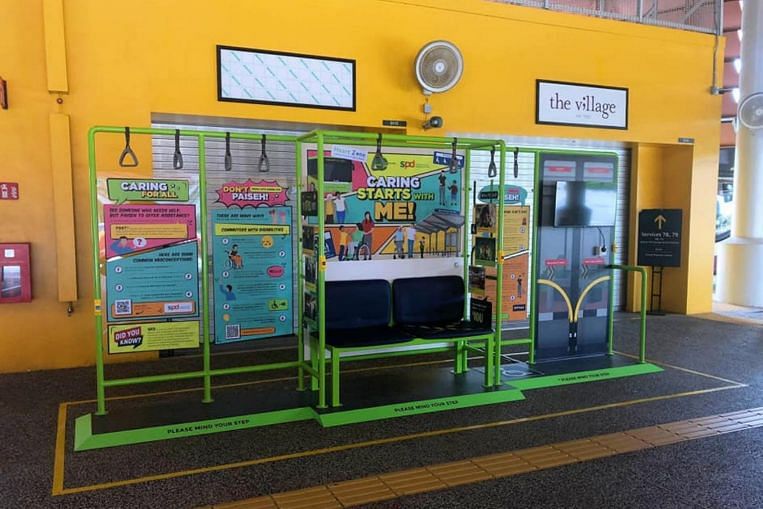 SINGAPORE – Some visually impaired people prefer to move around independently and may not always need help, and young commuters here may refrain from offering help to other commuters even if they consider themselves to be caring.

These results from a survey of more than 2,000 commuters in Singapore were presented at the launch of the first week of Caring Commuter Week on Saturday 27 November.

It is organized by the Steering Committee of Caring SG Commuters, which conducted the survey between April and November of last year. The committee, which was formed in 2020, conducted the survey across multiple platforms, including online and face-to-face group discussions.

The main conclusions of his report are as follows:

– Young people interviewed said that they could refrain from offering help because of their own concerns or challenges. However, some young people said they perform ‘indirect’ acts of care, such as quietly releasing their seats for vulnerable commuters or pushing the button to have the bus stop if they see a commuter running towards the bus. .

– The act of care goes both ways: the caregiver and the person being helped must show attention and appreciation.

As part of Caring Commuter Week, there will be a host of activities Saturday through December 5 to raise awareness of how everyone in the community can help make public transport journeys more inclusive.

For example, on Tuesday, some students at the National University of Singapore (NUS) will learn how to help vulnerable commuters, such as wheelchair users and the visually impaired, on public buses. The Public Bus Inclusion course will equip students with general skills such as how to approach a commuter to offer help and educate them about the needs of vulnerable commuters.

Course participants are part of the NUS Enablers – a group of students who are passionate about helping people with special needs.

On Wednesday, the 2021 Transport Gold and Caring Commuter Awards will recognize service personnel in the transport industry who have demonstrated courteous behavior and rendered exemplary service, as well as public transport commuters who have acted kindly to the public. people in need.

Tower Transit Singapore said in a statement on Saturday that an exhibition to promote the inclusion of disabled commuters on public buses opened at the Jurong East bus interchange.

This exhibit is part of a series of Tower Transit activities during Caring Commuter Week and runs from Saturday to December 31. It gives visitors an overview of what people with physical disabilities experience on public buses and offers advice on how people with disabilities can move safely and more comfortably on buses and how the public can provide service. aid.

Transport Minister S. Iswaran said in his opening remarks at the launch of Caring Commuter Week at the Land Transport Authority Auditorium in Hampshire Road: â€œOur daily commute is not just about commuting and commuting. ‘point to point, but also to the way we navigate shared spaces as a community. “

The creation of a caring commuter environment began as early as 2009, when the Land Transport Authority launched campaigns to promote kindness on public transport through acts of thoughtful behavior such as standing in line and giving way to those who do. need it most.

â€œWhile the efforts of the public transport committee and stakeholders are laudable, only by working closely with the community can we create a culture where caring for other commuters becomes a way of life,â€ said Mr. Iswaran.