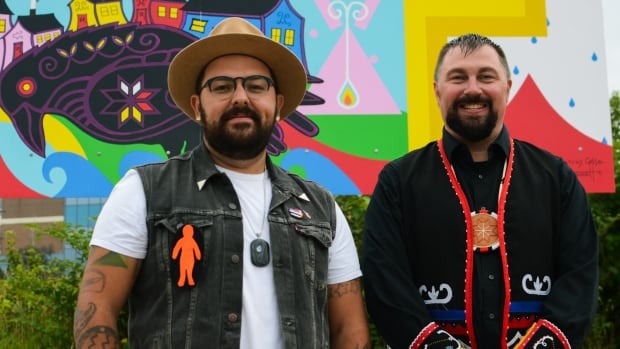 The community of Crow Gulch was dismantled decades ago, but now Mi’kmaq artists Jordan Bennett and Marcus Gosse have come together to immortalize it.

The couple collaborated on a mural that was unveiled on Friday where the community once stood, near the Corner Brook pulp and paper mill.

â€œHe never dies if the spirit and the memories stay alive,â€ Gosse said in an interview earlier this month.

The City of Corner Brook is preparing the site for use as a new park and rest area. Tucked into the hillside, the park will have picnic tables, a commemorative plaque, and a billboard-sized mural celebrating the people who once lived there.

â€œWe’re trying to show that the spirits of Crow Gulch, and other communities that are no longer inhabited, are still thriving,â€ Gosse said.

The artists worked on the mural in pieces; aluminum sheets the size of a barn door were arranged around the large workspace of the School of Fine Arts at Memorial University’s Grenfell campus.

When completed, the segments join together into a single face, measuring nearly three meters high by eight meters wide. They had originally planned to paint over plywood, but then turned to metal for the sake of longevity.

â€œWe want it to be on the pitch for as long as possible, as a public artwork,â€ Bennett said.

Watch the mural unveiling at an event in Corner Brook on Friday:

A new billboard-sized mural was erected in Corner Brook in honor of Crow Gulch, a largely Mi’kmaq community that was bulldozed in the 1960s. 2:12

Crow Gulch is a place with a difficult heritage; originally, people came from far and wide to settle there in the hope of finding work in the bustling stationery nearby.

The village was largely Mi’kmaq and was stricken by poverty and marked by social stigma. Municipal services like electricity have never been extended to the neighborhood. Eventually it was bulldozed in the late 1960s, its inhabitants moved out.

Despite the hardships people have endured here, Bennett and Gosse use their art to celebrate the history of their people in the area.

â€œFor me, this piece is about continuation,â€ Bennett said.

“These are the communities that once lived here in physical space, like Crow Gulch, who now live thanks to individuals who have made their home there.”

The mural features many symbols, including two prominent crows – a nod to the spiritual presence of their ancestors.

â€œWhat we’re trying to say is that the ancestors are with us in everything we do. They are proud that Aboriginal culture is doing very well now, â€said Gosse.

â€œWe live on a beautiful island which is rich in Mi’kmaq culture, and which has had very beautiful communities with a lot of memories. We want to highlight it in this painting.

Margie Benoit Wheeler lived in Crow Gulch from 1951 until its destruction in 1969. She still remembers the stigma that followed when living in the old community.

She witnessed the unveiling of the mural adorned with traditional clothing, symbols and beadwork.

â€œI feel so happy today because it was a long time coming,â€ said Benoit Wheeler.

“A lot of people recognize me for who I am, I guess.”

Benoit Wheeler said the community she once called her home was rarely mentioned; nowadays it comes to light.

â€œA lot of people are talking about it now. When I was in school, I didn’t talk about it too much,â€ she said.

Being of Mi’kmaq descent, which once brought shame and contempt, has now become a point of pride.

“I am a strong Mi’kmaq woman now.”

But the scope of the fresco goes beyond honoring a single community.

â€œTo me, he represents the Mi’kmaq communities of Newfoundland and other Mi’kma’ki regions,â€ Bennett said.

The mural is a first of its kind in the region: a large-scale permanent outdoor public art work by Indigenous artists did not exist in Corner Brook before.

â€œWe are very proud that this is one of the few pieces of Aboriginal outdoor art in Newfoundland,â€ said Gosse.

Because their work honors people of the past, Bennett and Gosse want the painting to leave its mark on people in the present and in the future.

â€œMy hopes, and I know it will come true, is that there will be many more works from other Indigenous artists in this province, to show the presence and community within our communities and cities,â€ said Bennett.

â€œHe’s going to be there for years to come,â€ Gosse said.

â€œPeople will see it and they will talk about it among themselvesâ€¦ It will help preserve Mi’kmaq culture.

Despite a past that includes the trauma of stigma, Gosse said he sees a better future for his people.

â€œI don’t think any part of Mi’kmaq culture is lost. It’s like treasure – we just need to come out and dig it up again.