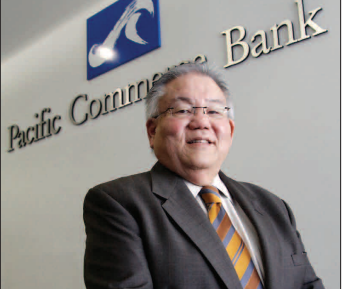 By GWEN MURANAKA, Editor of Rafu

Ken Kasamatsu, who used his financial acumen and volunteer spirit to uplift the Japanese and Asian American communities, died July 31. He was 75 years old.

Kasamatsu founded Pacific Commerce Bank to serve the needs of the JA community, serving as its first President and CEO.

He attended Maryknoll School, Loyola High School, and USC, where he was president and founding member of what was then known as USC Asian Pacific American Support Group, which later became USC APA Alumni Association.

He recently established a named scholarship at USC, the Kasamatsu Family Scholarship.

“He was proud to be a Trojan horse,” said Grace Shiba, executive director of the USC APA Alumni Association. “The type of leader he was was very thorough in everything. Very open to chat with me and someone very trustworthy I could confide in.

Kasamatsu worked at Sumitomo Bank (later California Bank and Trust) for 32 years before leading the initiative to create what became Pacific Commerce Bank. The bank opened in Little Tokyo on October 10, 2002.

“I saw in my mind that the support in the community was starting to dwindle. I thought because of Japanese banks leaving California, our community would be underserved. That’s why I took the opportunity to start a bank,” Kasamatsu said in a 2017 conversation with Leadership Education for Asian Pacifics, Inc. (LEAP).

He said the tendency towards complacency is a problem for many Asian Americans, who avoid taking risks for fear of losing face.

“Risk-taking is doing anything that takes you out of your comfort level,” Kasamatsu explained.

He retired from the bank in 2014, then returned in April 2015 to participate in strategic initiatives during its merger with a bank of similar size.

After retirement, he continued to work as a consultant for Pacific Bridge Companies and E-Central Credit Union, where he focused on nonprofit organizations.

Tom Iino, who served as chairman and director of Pacific Commerce Bancorp, praised Kasamatsu saying, “As founding chairman, he created a foundation and a strategy that allowed the bank to to be the first successful Nikkei-owned bank in history. Pacific Commerce Bank acquired two other community banks, merged with a similar sized bank, and sold the entity to a large regional entity, Enterprise Financial. For the first time, all Pacific Commerce Bank shareholders benefited. The community has lost a true leader.

Kasamatsu has devoted considerable time and energy to working with nonprofit organizations, including the Asian American Drug Abuse Program, where he served as Chairman of the Board from 2003 to 2016, Keiro Nursing Home, Japanese American Cultural and Community Center, Little Tokyo Service Center CDC, Boy Scouts of America (San Diego) and the Nisei Week Foundation.

During Wednesday’s Nisei Week Pioneer Spirit luncheon, a minute of silence was observed in tribute to Kasamatsu.

AADAP said Kasamatsu brought his financial expertise to the organization and also assisted with strategic planning, recruiting and board development.

“Even after his retirement, Ken generously gave his time and knowledge to help with the transition of leadership from Mike Watanabe to Dean Nakanishi. He provided one-on-one tutoring to Dean, giving him insight into the strengths and weaknesses of the organization’s finances. Ken has also always invited his vast network to support AADAP, many of whom are our leaders and supporters today. We, his AADAP ohana, are very grateful for Ken’s service to AADAP.

JD Hokoyama, former president and CEO of LEAP, said he had been friends with Kasamatsu for 70 years from Maryknoll.

“I think he picked up his sense of community at both Maryknoll School and Loyola High School. Both places have emphasized giving back to the community and serving others as important principles to uphold,” Hokoyama said. “Ken cared deeply about the community. Since Ken began working for Sumitomo Bank (1968-2000) at the main office in Little Tokyo (now California Bank and Trust), he has always been deeply involved in the JA and API community. He was happy to share his financial and business expertise with many nonprofit groups regarding their budgeting process and long-term financial planning that were located in Little Tokyo and the Crenshaw Square area while working at the Sumitomo branch in Crenshaw Square, which at one time was a thriving Japanese-American enclave.

“He not only convinced the bank to support local community organizations through checking and savings accounts, but also through donations to support the mission of these groups.”

Kasamatsu was humble when talking about his accomplishments. He encouraged younger generations and hoped more Asian Americans would become leaders in government, American business and nonprofit organizations.

“I believe I am a loving son, husband and father who does his best to provide for his family and at the same time try to give back to his community,” he said.

Due to current COVID conditions, a celebration of life will be held in the fall.

VOLUNTEER OF THE WEEK: Ali Hopson donates more than an hour of his time – The Vicksburg Post