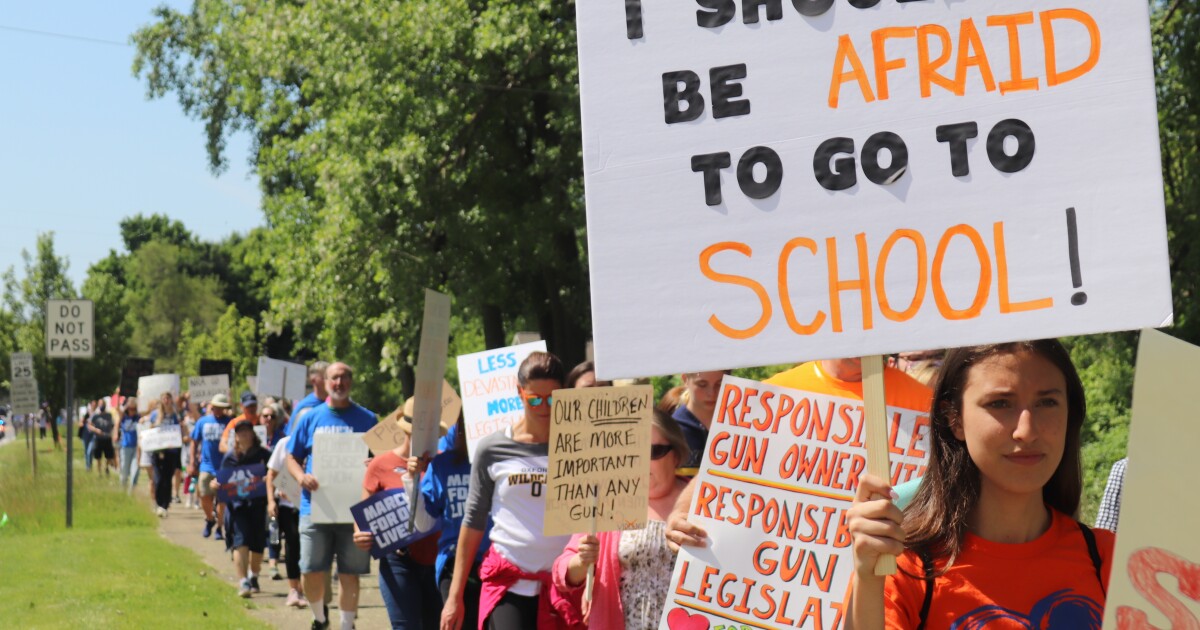 Students, parents and community members marched through Oxford on Saturday, many wearing orange or blue T-shirts that read March For Our Lives.

Organizers say nearly 600 people showed up for the protest in Oxford.

There were about 300 protests across the country, including those in Detroit, Ann Arbor, Lansing, Traverse City and Port Huron.

This protest, like many others across the country, was almost entirely student-led. Rising seniors and recent graduates spoke about what it was like to survive a mass shooting at their school. And they called on the authorities to implement stricter gun control.

Dylan Morris was one of the students who organized the march.

He and other students started a non-profit organization called No Future Without Today, a group focused on gun reform and mental health support.

Aubrey Greenfield is an aspiring student at Oxford High School.

She is 17 years old. She called the mass shootings the worst feeling imaginable.

Madeline Johnson agreed with her. She said she was seconds away from coming face to face with the shooter at Oxford High School. She ran away. Not her best friend Madisyn Baldwin.

“Madisyn was so excited for the next chapter of her life and she was killed just before Christmas, her senior year. She never got to go to prom or graduation. And she never will. college or find her dream job…the life that she never took for granted was taken away from her, in an instant, at school, among other things,” she said.

Enough is enough, said the students, including Reina St. Juliana, who lost her 14-year-old sister Hana in the Oxford shooting.

St. Juliana said her generation would not wait and do nothing as school shootings continue to happen across the country.

“We shouldn’t have to be resilient after watching our friends die. And we shouldn’t have to be strong after our brothers and sisters are killed,” she said. “We will not accept a country where shell casings are found in the hallways, where blood is on the walls and where the bodies of dead children lie on school grounds.”

“Often during active shooter drills at school, when I would hide in a corner silently waiting for the mock shooter to pass our class, I wondered why it was up to us kids to save ourselves- same?” said Saint Juliana.

The kids weren’t the only ones talking. Parents and gun control advocates also spoke up – for what they called “common sense gun reform.” Things like gun storage laws, background checks, and mental health assessments.

Students say this is just the beginning. They plan to hold more protests and marches and continue to push for legislation calling for gun reform.

The protest included a march of more than three miles with a stop at Oxford High School. There was a minute’s silence for each of the four students who died in the shooting in November: Tate Myre, Madisyn Baldwin, Hana St. Juliana and Justin Shilling.