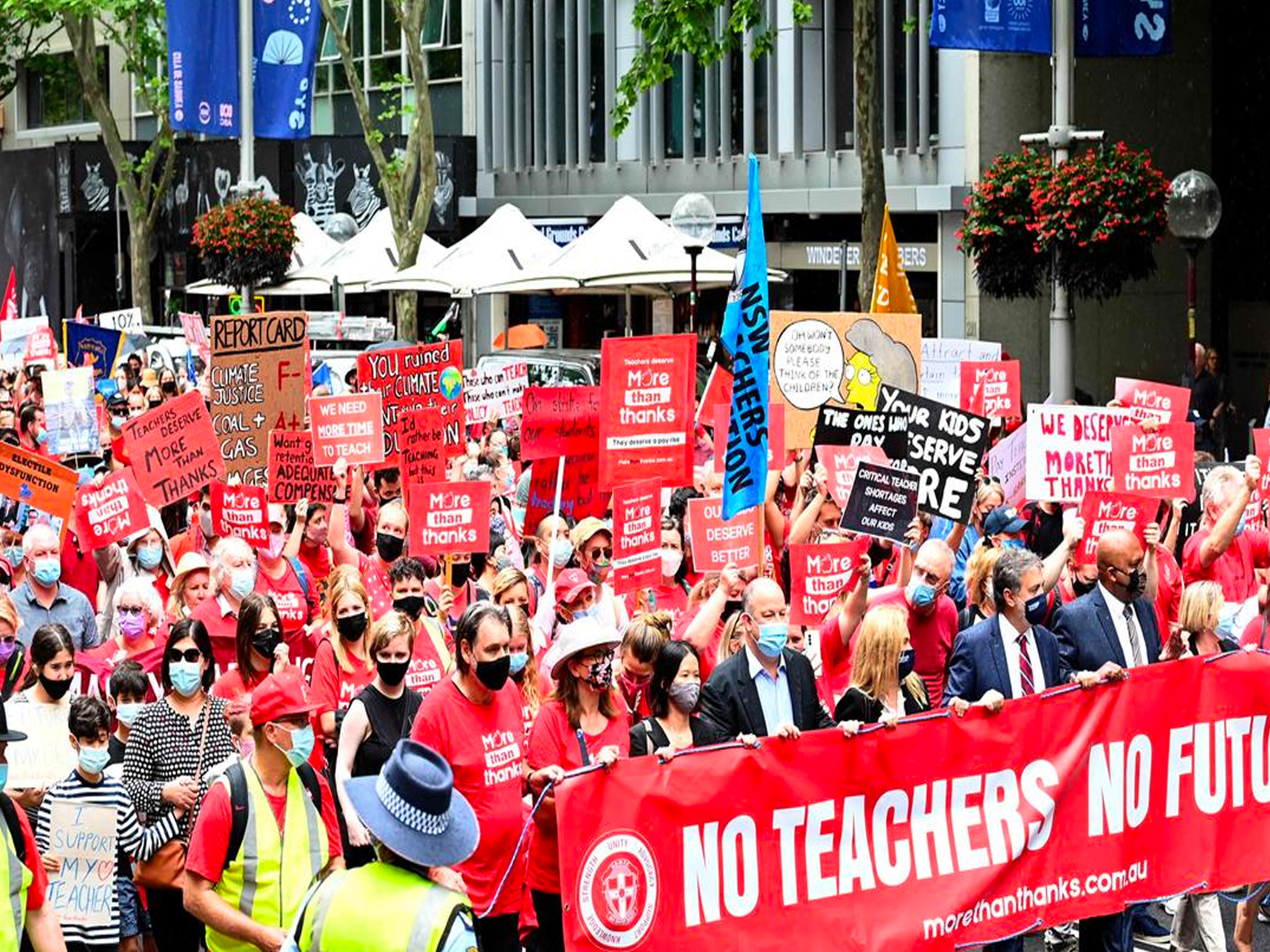 Public sector unions have taken industrial action across New South Wales in recent months. You’ve probably seen them on your News Feed and been touched by the lack of workers in some of the state’s most essential public services. The NSW Perrottet Government, as employers and public service providers, is the target of these actions and is being taken against the backdrop of a nationwide shortage of nurses, midwives and teachers ‘State. As hospital wait times skyrocket, public schools are short of teachers and March figures show a low on-time rate of 71% for Sydney trains. Union demands for more staff, better pay and better workplace resources and rights across all public sector services are integral changes that all communities in NSW will benefit from and therefore must support.

These actions are occurring primarily due to the New South Wales Liberal government’s freeze on workers’ pay rates. Announced by the Berejikilian government in early 2020 before the worst of the pandemic, this cap froze standard salary increases at 2.5%. The cap meant workers’ wage increases were significantly below the rate of inflation, which was 3.5% at the end of 2021 according to the ABS. They are almost always below the 2.5% maximum – nurses and midwives were offered a 0.3% pay rise in 2020. In real terms, these “pay increases” should be seen as pay cuts, given the rising cost of living.

As a result, the essential workers who maintain our most important infrastructure and systems have been thrown under the wheels of poverty. Wage cuts don’t just cause immediate financial harm to workers: as pay cuts pile up year after year, workers lose thousands of dollars in retirement income for life. In the long term, this leaves public sector workers far worse off in retirement.

Most university students haven’t experienced such noticeable effects of industrial action in their lives before, and that’s because the public sector hasn’t called a strike in years. This resurgence of labor action is taking place against the backdrop of a global pandemic that is affecting us all, especially public health workers who have been working tirelessly for three years. Teachers have gone above and beyond in the shift to online learning models and disrupted schooling. Thousands of essential workers have been transported to work on public transportation to keep our state running. A pay cut is now a slap in the face!

Since communities are so dependent on public sector work, it can feel more personal when we hear about the injustices these workers face in their workplaces compared to private sector workers. Bus drivers are denied human decency when they cannot go to the bathroom. Nurses work in departments that are so understaffed and under-resourced that many have left the profession altogether. Paramedics have been on high alert for weeks at a stretch, where more than half of their patients are first priority. This leaves patients in emergency lines for hours waiting for life-saving treatment. Public high school teachers are forced to merge classes to supervise students or leave older students unsupervised before exams.

After years of fruitless negotiations with a liberal government hostile to the public sector, taking industrial action is obvious. When schools are without teachers, when emergency room wait times last for hours, when train services are cut, it is clear that strikes do not cripple our infrastructure, austerity does. Negotiations with a government that does not want to listen to the lived experience of desperate support workers lead nowhere. Strikes are our only way to make those community voices heard and to win the demands for well-funded, well-funded public infrastructure that all communities deserve.

As members of the community, any anger we feel – from train delays or overnight stays in hospital waiting rooms – must be directed at the Perrottet government. Liberal Party policies supporting private enterprise and funding public services are unequivocally why our public sector is hanging on by the goodwill of these workers.

Instead of tackling the pressure on public service workers, Perrotet took these public sector unions and the workers they represent before the Industrial Relations Commission. This body, governed by NSW industrial law, can limit industrial actions as it sees fit. In other words, there is effectively no right to strike in New South Wales.

On the eleventh hour of various strikes and industrial action, the Chief Commissioner (who also happens to be the wife of a Liberal MP for NSW) has made the arbitrary decision that industrial action is against “the public interest or economy”. Such rulings declare strikes illegal, handing unions fines and summonses to appear before the Supreme Court. Workers get thrown at them by a senseless bureaucracy when they desperately need change.

The only way for these workers to win big against a hostile Liberal government is through the solidarity of their communities. These unions fight just as hard for the rights of our communities to access quality infrastructure as they fight for their rights at work. We all need to publicly support the workplace activism of these workers. We must recognize that their commitment to industrial action is a commitment to their workplace and our communities.

If public sector nurses, midwives, teachers, transport workers and paramedics get their demands, we will see significant and sweeping changes in public jobs and public workplaces. The changes will improve the situation of our communities after a pandemic, compared to the difficult situation in which the Perrottet government places us. They will also set a precedent for taking industrial action, even if it’s against your government – because politicians and bosses aren’t the arbiters of fair community standards, they are the people!

So the next time you get off a bus, thank the bus driver and say a cheeky “keep up the strikes,” or listen to a thread about the strikes with your nurse the next time you’re in the hospital. Join your union and be sure to discuss the strikes these public sector workers are carrying out, so that your workplace seeks to encourage these workers and show them solidarity.

Be a cheeky campaigner – leave letters of community support on car windshields at hospitals or chalk (read: spray paint) a message of support around your local train station. Tell your mother to call your brother’s teacher and encourage him to strike. Move solidarity motions to your local residents community group, parent-teacher networks or student representative councils, so that more people are made aware and can share their support for these workers. And come with a team of buddies to the NSW Parliament on the next strike day.