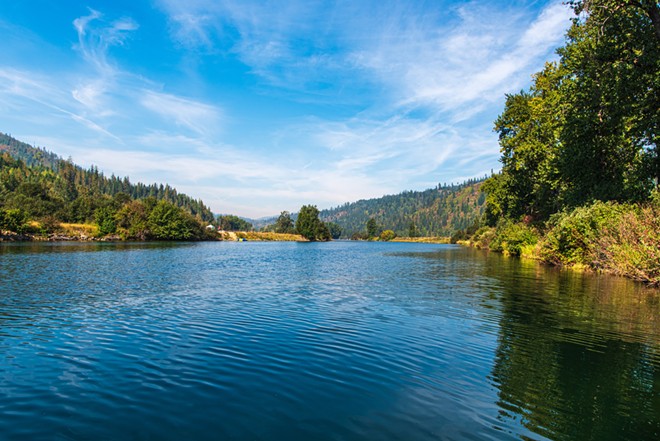 The beauty of the St. Joe’s River in northern Idaho is attracting recreational users more than ever.

Eeven the first weekend of April Bringing snow and hail to parts of the St. Joe’s River in northern Idaho, anglers braved slightly warmer temperatures on Sunday, April 3 to fish for cutthroat trout. A few floated down the river in rafts on a gray, overcast day, while others found retreats along the river where they could wade through the icy, crystal-clear waters.

In the summer, the river rumbles with people on rafts and inner tubes, floating on the body of water that stretches from the Bitterroots to Lake Coeur d’Alene.

But even though the public enjoys boating and fishing along the river, there are few public hotspots where people can put their boats in and out. Recently, one of the few logical places to start a float trip was in danger of being closed to public access.

The Buell brothers, who own land on the east side of Big Creek, asked the Shoshone County commission to vacate a strip of land that included a gravel ramp from Potlatch Road to the west side of the creek. Jack Buell, who retired in 2021 after serving as county commissioner in neighboring Benewa County for nearly 50 years, owns large tracts of land along the river corridor and has employed many in the area for decades. years thanks to his lumber business.

In recent years, the Buells have also been granted a strip of waterfront land on the west side of Big Creek in a legal proceeding claiming that river accretion has added to their land. This made the Shoshone County ramp the only feature touching the mouth of Big Creek that they had no claim to.

At a March 24 public hearing before the Shoshone commissioners in Wallace, the Buells were represented by Steve Syrcle of Tri-State Consulting Engineers and attorney Susan Weeks. The two attempted to argue that people abused the hotspot by camping, littering and trespassing on Buell’s property on either side of the creek.

Weeks argued that the county could continue to use the ramp to extract water from the creek to reduce dust on Potlatch Road by simply making it a condition of abandonment. In this way, public access could be blocked, but the public interest in road maintenance would remain.

She argued that the public didn’t actually have access to the Joe there to begin with.

“The area you are being asked to vacate and abandon does not affect any of the public waters of the St. Joe,” Weeks told commissioners.

She and Syrcle argued that Big Creek is not navigable water that should be accessible to the public. The Idaho Department of Lands does not include streams along the St. Joe on its list of navigable waters there, but Idaho state law notes that any stream that can float a Six inch diameter log during high water is navigable and must be open for public use. However, the law does not allow crossing private land to access this public waterway.

About two dozen members of the public, many of whom own property near the Joe, told commissioners that the mouth of Big Creek is one of the few places along nearly 50 miles of river where people who don’t own no shore land can enter the water. Abandoning the county-owned ramp would not be in the public interest, they argued.

“I have a problem with what’s going on with this,” public commentator Robert Archer told the commissioners, “because all over the world along the river corridors, sports people and people who want to recreate are losing access at a breakneck pace. I think if you let that go, it’s going to set a very dangerous precedent.”

Weeks argued that for years the Buells had no problem with people accessing the creek or river through their property, until people started to demand who access and disrespect privately owned portions of land.

Eventually, the three commissioners, Mike Fitzgerald, Jay Huber and John Hansen, voted to keep the property, rejecting the request to give it to the Buells.

But while the vote appeared to be a victory for many in attendance, some fear this is just the beginning for those who want to ensure recreational opportunities remain available for years to come.

“Even though it went our way, I don’t think our fight is over,” says Tracie Swanson, whose family owns land at a few properties in Big Creek. “I feel like we have to continue to be watchdogs.”

This access to Big Creek is one of the few places floaters can access the St. Joe River.

Prior to their March 24 vote, the commissioners each explained that they were not convinced it was in the public interest to relinquish the Big Creek property.

“The benefit the county would get is not there if we had to give it away,” Commissioner Hansen said.

Commissioner Fitzgerald also reiterated that the county was under no obligation to surrender the land.

“There is a whole history of public use of the area. The right-of-way provides, whether as an attractive amenity or nuisance, the ability for people to recreate and use the waterway” , said Fitzgerald. “I want to acknowledge though, and we all know that living in this area is a beautiful area, but not everyone who recreates or uses properties is respectful.”

In recent years, the real estate market in northern Idaho has exploded with people moving in from other parts of the country. With this growth and the added cabin fever of the pandemic, the region’s wealth of recreational opportunities has also seen a spike in use, with people exploring the region’s majestic lakes, snow-capped mountains and forested hiking trails. .

The enclave’s rivers are no exception.

“The right of way provides, whether as an attractive amenity or nuisance, the ability for people to recreate and use the waterway.”

But rather than complain about public access to St. Joe, residents drove nearly 100 miles around the mountains for the March 24 public hearing to tell their elected officials to maintain public access for all.

“All these people you see on the Joe, it’s because they know someone who lives there or they use these four or five exit points to get on the Joe,” says Patrice Pfeiffer. Interior during a phone call after the meeting.

Pfeiffer and other public commentators pointed out that a popular float, from Big Creek to Calder, where there is a store and a logical place to hang out, takes four to five hours in the summer. If access to Big Creek were removed, the next closest access point to Marble Creek would make the float almost twice as long and untenable for most people.

Pfeiffer, who lives in Calder and whose son and grandchildren have access to the river, was happy the commissioners chose to keep access to Big Creek.

“I was thrilled, I just felt our voices were heard,” Pfeiffer said.

Several public commentators told the commissioners that they were concerned about public notification of these types of decisions. For the Big Creek decision, few shoreline property owners were notified of the ramp evacuation request.

Swanson, whose homestead is a few lots east of the Buells’ land near Big Creek, says Interior that she and other landowners more than 300 feet from the creek were not notified by mail of the decision which may affect them. A notice was published in the Shoshone News-Pressbut the people who live there are more likely to subscribe to the St. Maries Gazette Registershe said, noting that even a poster near the site might have attracted more attention.

“It is unfortunate that we have to conduct this entire investigation on our own and are not informed as interested parties when making decisions on our public waterways,” Swanson said.

She and others plan to continue to pay close attention now that they are aware that these types of requests may again come before the county.

“Idaho is unique in that we believe in our rights to our public lands,” Swanson said. “I want us to be good stewards of our land in the sense of wrapping it up, wrapping it up, not encroaching on it, but also maintaining our public waterways and public access to the land that is mine and yours.”♦