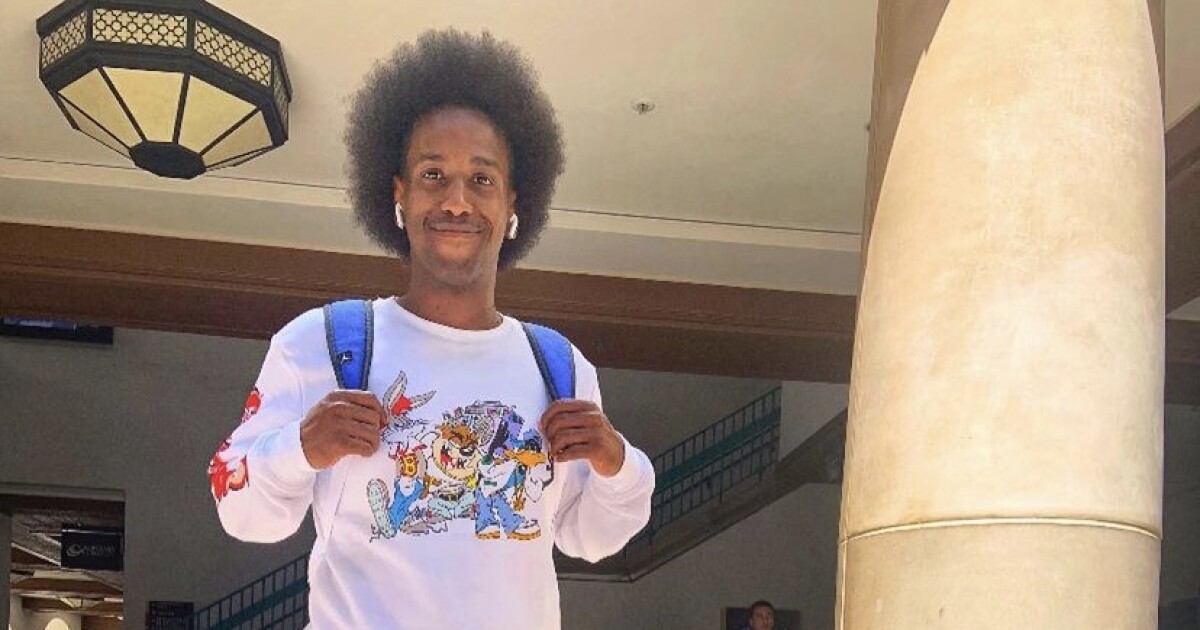 Mohamed Musse graduated from SDSU this year with a bachelor’s degree in psychology. This is an incredible accomplishment for someone whose life has been filled with uncertainties.

He was born in Kakuma refugee camp, established in 1992, in northwest Kenya. He is Somali and his family is from East Africa. He arrived in the United States when he was just 2 years old in 2000, accompanied by his mother, brother and sister. Today he lives in “East Diego”, better known as City Heights.

Somalia has experienced three decades of political instability and civil war. Famine, floods and drought have resulted in a huge migration of refugees. According to the Borgen project, more than 2 million Somalis live outside their country. Refugee camps are seen as temporary residences, but many live there for decades in cramped quarters and often in tents. The US Somali refugee population in 2015 is estimated to have reached around 150,000.

He is a role model for young people and uplifts the morale of many. He attended Crawford High School, where he says over 50 languages â€‹â€‹are spoken. He sees his community as a community that strives for educational and economic success, but needs support and resources to achieve it. â€œYou would think Crawford High School would have an ESL program to help us out, but it doesn’t. We had to help each other.

Musse attended San Diego City College and earned an associate’s degree in communications and transferred to SDSU. He plans to get a Masters in Councilor Training and later in his life would like to become mayor of San Diego. These are noble goals, but one that his heart and soul are determined to accomplish.

He said he believed he was endowed with a spirit of compassion and love for others. He has learned many lessons from volunteering in the community and sees himself as a public figure the community can count on. â€œI am a mentor, a big brother and a trusted family member, and a role model for young children of all cultures who live in my community. “

Mohamed works at the YMCA as a youth basketball coach and is a mentor at the United Women’s of East Africa organization. â€œU of East Africa started as a group of women who built a program. There was no one to help us in the community; we felt neglected. Sahra Abdi took her time to create this program for children and everyone, providing resources, food, financial aid, health services and educational assistance. They came together to help the community, â€Musse said.

Adapting to a new world is difficult and takes courage. â€œI think we should preserve our cultures but be united as a nation,â€ he said. â€œThe Somali community is a family. We all see each other as brothers and sisters.

Musse’s motivation comes from the fact that she grew up in a low-income family and was not always guided. No one told him to stay in school or get a diploma. â€œHonestly, it was super tough. I didn’t want to go to college or do the things I’m doing now, but my mom came to America for a better life. I want my mom to be able to say, my son came here and he had a better life. My mom is my biggest inspiration. Without it, I wouldn’t be able to stay on track.

He said he feels his community is often misunderstood and mislabeled. â€œWe are always called violent and we are only seen as a statistic, so I have to step up my efforts. … I want to erase negative thoughts and bring positivity to the community. Whether people like me or not, I do what I can to uplift my community. “

Sahra Abdi, of United Women of East Africa, says their organization has started helping women make the transition. â€œBut then there were the boys, so we helped the boys. Mohamed works with young people, especially men, to encourage them to move forward. Mohamed helps inspire young people. He is a strong and positive role model.

â€œMohamed makes us proud. He is amazing and he will do great things for the community.

Beatrice Zamora is a local author, community activist and retired community college educator who is a member of UT’s Community Advisory Board. She is also the principal dancer in the Danza Azteca Chichimeca tradition, a dance indigenous to Mexico.

Someone San Diego Should Know is a weekly column written by members of UT’s Community Advisory Board about local people who are interesting and remarkable because of their experiences, accomplishments, creativity, or credentials.

Over 60% of SNAP beneficiaries face barriers to healthy eating

Ohio Arts Council grants include $ 100,000 to the Butler Institute