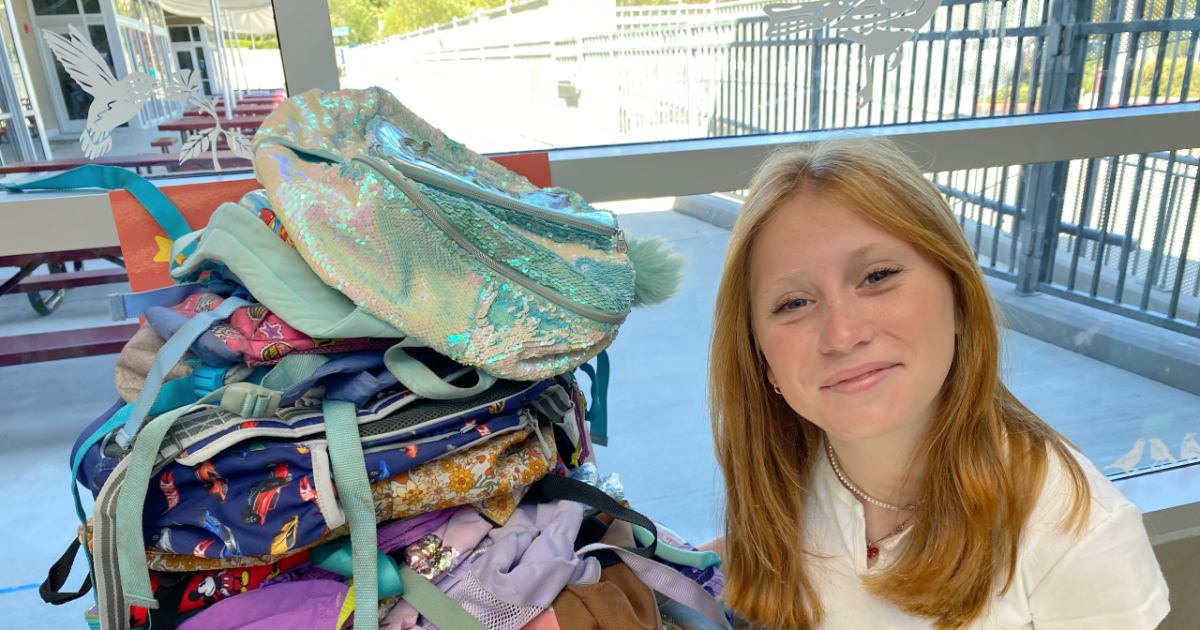 A local teenager whose community service project provides backpacks to several non-profit groups that work with children and families is halfway to her goal of collecting 400 lightly used backpacks after enlisting the Solana Beach School District (SBSD) as a program partner, according to an SBSD press release.

Kalia Roper, a recent graduate of St. James Academy, has hosted the Backpack Giveback for the past two years. To solicit donations for the effort, she designed collection boxes and promotional flyers that she placed at all seven SBSD schools, and partnered with Solana Beach Library, Staples, Geppetto’s, and Lomas Santa Fe. Country Club to serve as collection points, as well.

SBSD students donated approximately 200 of their backpacks in the last week of school. The campaign continues through August 14 on other community sites, where Kalia says any used backpack with a working zipper can be dropped off.

“We are thrilled to be able to support Kalia’s mission and offer our students the opportunity to contribute to such a worthwhile project that benefits children in our community and beyond,” said SBSD Superintendent Jodee Brentlinger. , in the press release. “Kalia is an inspiring young leader, and we look forward to partnering with her in the future.”

Last year, Kalia worked with the San Dieguito Union High School District on the campaign and received over 300 donated backpacks.

“At first I thought it was going to be pretty small,” Kalia said of the initial drive in the press release. “I thought I was going to donate the backpacks to the families we know are in need.”

Kalia started thinking about the project last year when she was on crutches for a knee injury and became dependent on her backpack to keep all the things she needed with her, but hands free. She also realized that not every family can afford a backpack.

“I saw we had so many backpacks, and some people don’t,” Kalia said. “I thought if you could give one away, you’d really make someone happy.”

The 14-year-old works with several charity groups who need backpacks for the work they do: Solana Beach Backpacks for Kids, a local non-profit that provides insecure public school children food backpacks filled with non-perishable food; a Ukrainian refugee outreach effort that provides resources to those displaced by war in Ukraine; the Therapeutic Childcare Center in Father Joe’s Villages, which aims to address the unique academic, psychological and social challenges faced by homeless children; the Emilio Nares Foundation, which helps low-income and underserved families caring for a child with cancer or other life-threatening illness; and Birthline of San Diego, which provides support and resources for pregnant women and families with young children.

Kalia, who will be attending Bishop’s School this fall, is also raising money to buy new backpacks for her partner organizations through GoFundMe campaigns, and with proceeds from the sale of a book she wrote in collaboration with graphic designer Sandro Alberti, entitled “Decorate Your Very Own Backpack: Tips and Tricks”, which is available on Amazon.

To participate in the program, visit www.backpackgiveback.com for more information.