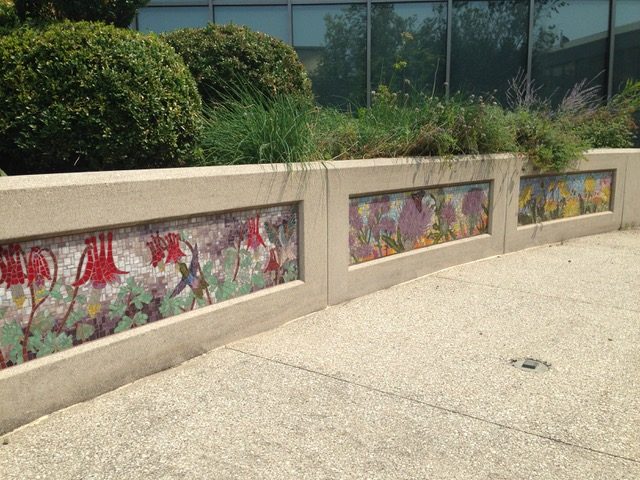 The flower tile inserts in the courtyard of the Levy Senior Center are an interesting example of public art, as they were privately rather than publicly funded, with initial assistance from the Evanston Community Foundation.

One would expect that the 31 glass mosaics adorning the raised flowerbeds of the inner courtyard would have been funded by Evanston’s Percent for Art program, in which up to 1% of the building budget for a public building can be devoted to art. But they weren’t.

When the Levy Center at 300 Dodge Ave. was designed by Ross Barney Architects, a landscaping firm was hired to design the courtyard separately. Ted Wolff, of Wolff Landscape Architecture, formerly of Chicago, had previously worked with artist Ginny Sykes on a large mosaic sculpture she made beside the Chicago River. Wolff wanted Sykes to do something this nice on the sides of Levy’s raised beds.

The Levy Garden is named after Hulda B. and Maurice L. Rothschild Enabling Garden in honor of the Rothschilds, who raised funds for it. Their name is integrated in the central panel. The garden allows elderly people, even in wheelchairs, to plant and maintain the above-ground flowerbeds.

All of the plants depicted in the mosaic tile have healing properties, either scientifically documented or informally researched, and all are native to Illinois. Members of the Levy Center wanted the plants to be brightly colored so that the garden would be colorful all year round, even during the winter months when it would only be visible from inside the building.

The mosaics were created in Sykes’ studios – she had two studios at the time, both in Chicago. His assistant, Julia Sowles, also a tile artist, helped with the panels. However, they weren’t created at the same time, because they weren’t funded at the same time. The first panels were installed in 2004 and the last in 2016.

Christina Ferraro, then director of the Levy Center, and Leslie Wilson, former program coordinator, facilitated fundraising, and Sue Roberts funded the final 10 panels as her legacy. None of this information is displayed in the center, although a wall plaque was promised at the time.

Sykes lives in Chicago and holds a BFA from Washington University in St. Louis, where she serves on the advisory board of the Sam Fox School of Art. She also holds a master’s degree from Loyola University in Women’s and Gender Studies.

Sykes said the study gave her the theory and language to back up her ideas, as feminist ideas guided her work at the time in interdisciplinary performance.

An artist who works in several mediums, she paints, draws, sculpts, works with ceramics, installation and video performance. She has taught at the Evanston Art Center, the School of the Art Institute, and the Lill Street Art Center, both in Chicago.

Sykes also studied painting and art history at the Cecil Studio in Florence, where she says she became an Italophile. She is fluent in Italian and often travels to Italy. She has also been teaching yoga for five years.

Sykes is responsible for the beautiful Rora at Erie Terraces, a park on the Chicago River. Erie Street ends dead end in the terrace on the east side of the river. The park is on two levels; the horizontal mosaic panels are at street level and one descends the stairs to see the nine-foot-diameter tondo (a circular piece) on the river landing. It can also be seen from the river on various boat and kayak tours.

Sykes also completed a large piece in Terminal 3 at O’Hare International Airport, as well as a group of three tiled columns in Uptown. In both of these Chicago projects, Sykes worked with teenage apprentices through arts programs, city agencies, and other partners.

For all their beauty, the Levy Center mosaics need attention. Garden walkways and raised walls are dirty and could use a high pressure wash. The mosaics themselves experience efflorescence and require the attention of the artist or someone experienced in cleaning mosaic tiles.

Nevertheless, these works of art are always beautiful – they and the garden are a joy.