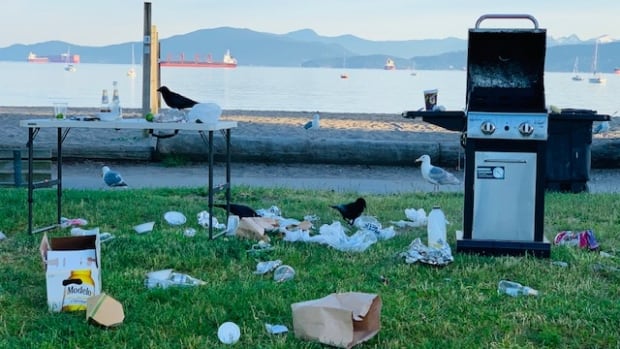 Volunteers clean up after Vancouver beaches are littered with trash

Dozens of volunteers cleaned up several Vancouver beaches on Sunday morning after being left littered with cans, bottles and trash overnight.

Beaches in Vancouver’s Kitsilano neighborhood and English Bay, which are generally kept clean even during peak season, were both left with unusual amounts of litter on the hottest weekend of the summer so far .

Residents who volunteered to clean up the mess said they were upset about all the trash.

“To be honest, I’m really disappointed to see it,” Kassandra Sison said as she picked up litter in English Bay. “We’re probably going to have at least half a dozen [garbage bags] if not a good dozen if we continue.”

Sison was at the beach with the Coastal Water Protectors, a volunteer group from the BC Métis Federation, who had planned to clean up the beach on Sunday.

“I found a lot of things”

She said the group called the Vancouver Board of Parks and Recreation to offer to partner with them for the cleanup, but were told it wasn’t necessary.

“They said ‘oh no, we have a team there every day, you can come and try but you won’t find anything’ and we found quite a few.”

CBC News contacted the Park Board to inquire about its cleanup crews, but did not immediately receive a response.

Across from English Bay Beach, Kitsilano Beach and its surrounding parks were in a similar state, according to local residents.

Cans, plastic cups, bottles and empty beer crates were among the trash.

In May, the Park Board launched a pilot project allowing alcohol consumption in more than 20 Vancouver parks for the summer of 2022, including Kitsilano Beach Park and Hadden Park near the beach. However, it is forbidden to drink on the sand or near the water.

According to the Park Board’s website, staff work with the Vancouver Police Department and Regional Health Authority “to ensure each site is safe, properly managed and well maintained.”

After the summer, parks staff will make recommendations to council on how to proceed with alcohol consumption in parks based on what they learned from the pilot project.