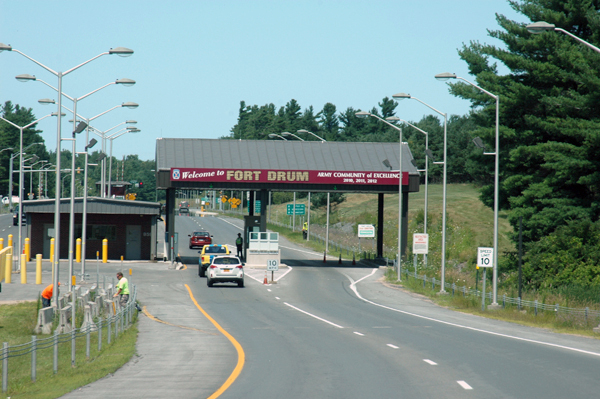 One of the gates to Fort Drum near Watertown. Photo: Mark Kurtz

The US military is reorganizing to stay ahead of the changing nature of conflict around the world. Fort Drum hopes to be part of that future.

The military base near Watertown is one of 13 military communities nationwide vying to host a multi-domain task force. Three out of five have already been assigned.

David Zembiec, chairman of the board of Watertown-based Advocate Drum, is helping lead an effort to attract the new unit which could bring up to 3,000 additional soldiers to the area.

Zembiec spoke with David Sommerstein of the Multi-Domain Task Force, which is the latest evolution of the US military. Their conversation has been lightly edited for clarity.

DAVID ZEMBIEC: Basically, these task forces could essentially conduct operations, multidimensionally, on land, sea, airspace, and cyberspace. We know that they are looking for a fourth one which would be somewhere in the arctic region, which would probably be Alaska. And then they look for a fifth to park. Fort Drum is one of thirteen facilities competing for these five projects.

DAVID SOMERSTEIN: Why does Fort Drum think it is qualified to host this among the thirteen, and in a good place to get it?

ZEMBIEC: Well, the 10th Mountain Division [based at Fort Drum], is the most frequently deployed division within the military. And I think that demonstrates Drum’s ability to deploy troops quickly, which we would expect this type of task force to need. So they look at the military value. They look at environmental issues, all sorts of things by putting a site for this capacity building capacity.

And then another major factor in the selection process is community support. So that’s what we’re focusing on producing right now.

SOMERSTEIN: Why community advocacy for this? I mean, there are already 15,000 soldiers [at Fort Drum] and many more civilian jobs there. Why recommend bringing potentially 3,000 additional people?

ZEMBIEC: Well, because we, like I said, showed before we could handle those numbers. We have had up to 20,000 soldiers stationed at Fort Drum in the past. And for the region, that’s 3,000 more paychecks in our region. So soldiers and their dependents spend money in our communities, live in our communities, and the community comes in general to support the Fort Drum mission. But it’s really economic development in that aspect.

SOMERSTEIN: So what should the community do to demonstrate this support to the Department of Defense?

ZEMBIEC: I just swamped them with letters of support I guess at the time. As letters from various agencies point out, Fort Drum has the capacity to accommodate an additional 3,000 troops over what has been shown in the past, underscoring its deployability, underscoring community support in terms of services, the infrastructure that the community has created.

The region has invested billions of dollars in infrastructure to support Fort Drum, from water service for Drum to incentivizing and supporting housing development for s ensuring there is quality housing for troops, advocating for funding for the I-781 auxiliary highway which now provides direct access from Fort Drum’s main gate to Highway 81 to help deploy troops.

And also just remind the Army that even our health care and educational model in the region. It was a conscious decision by the community and the military to expand schools and community hospitals to serve Fort Drum. It’s kind of a unique model because they don’t have to maintain their own hospital, their own school.

And from a health care perspective, when you look at the hospitals in the area from St. Lawrence to Jefferson County, that combined population of Fort Drum’s population – soldiers and their dependents – plus our civilian population created a critical mass.

We were able to recruit and have a number of medical specialties available in that area that, on our own, whether it was the community or Fort Drum, if those populations were separated in terms of where they went for health care, would not be able to support . It is therefore a cost saving for the army and a quality of life problem for the residents.